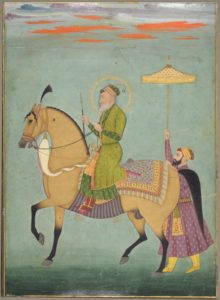 One day, a king, his minister and his party went hunting deep into the jungle. Now the minister was renowned for his wisdom and for being faithful to the motto: “God does everything for the greater good”; and whenever someone worried, unhappy or melancholy came to seek his advice, he comforted the afflicted one and encouraged him to recognize the truth of this proverb.
In pursuing the game, the king and the minister got separated from the rest of the party, wandered far into the interior of the vast forest and eventually got lost. The sun reached the meridian. The king was overwhelmingly tired and hungry. They started resting in a tree’s shade.
— ”Minister”, said the king exhausted. “I am very hungry. Can you find me something to eat?”

The minister looked around and saw fruit on trees. Climbing one of them, he gathered some ripe fruit and offered them to the king who, in his haste to eat, cut the tip of his finger off using a knife. He dropped both the fruit and the knife with a cry of pain, and from his injured finger blood began to flow.
— “Oh, Minister!”, he shouted. ”It hurts!”
— “‘God does everything for the greater good’”, calmly replied the latter.

These words did but get the king, already irritated, even more worked up. He went berserk and exclaimed:
— “You idiot! Enough with philosophy! I’ve had enough! While I suffer a terrible punishment, the only consolation you offer me is: “God does everything for the greater good”. How can this be the greater good when my pain is real and obvious? Go away, I shall not need you in the future; you shall remove yourself from my sight and never again come before me”.

Unable to control himself, he rose, furiously kicked the minister and told him to withdraw immediately. On leaving the king, the minister repeated calmly:
— “God does everything for the greater good.”

The king remained alone; he then tore a piece of cloth off his robes and bandaged his injured finger. He was brooding over the incident when he saw two strong men approaching him, who immediately set about him and tied him up. Fighting or resisting would have been futile, as both men were built like giants.
— “What are you going to do to me?” the king asked, terrified.
— “We are to sacrifice you on the altar of our goddess Kālī”, they answered. “It is customary for us to present Her with a yearly human sacrifice. The time has come and we were looking for a human being, when fortunately we found you.”

These words filled the king with terror.
— “Let me go, I’m the king of a country. You cannot sacrifice me”, he protested.

The men laughed.
— “Thus will this year’s sacrifice be unique and our goddess be extremely pleased, when she sees that we have brought an important man to Her altar. Come”, they said.

They dragged the king towards Kālī’s altar, a short distance away. The king was duly placed on the sacrificial altar. Then just before the fatal blow was stricken, the priest noticed the bandage on the king’s left hand, took it off and saw that the finger’s tip had been cut off.
— “This man is not worthy of our Goddess. Untie him. The Goddess demands a pristine, intact man, while this one isn’t whole. A piece of his finger is missing. Let him go”, he said.

Loosening the ropes that had been binding him, the men freed the king and then let him go peacefully.
He then remembered the words the minister had said when he had injured his finger:
— “God does everything for the greater good.”
Indeed, had he not luckily cut himself, he would now be a dead man. He was deeply affected by the memory of insulting and abusing his friend and so, eager to apologise for his blunder and to ask for forgiveness, he went through the woods, calling for his minister, whom he finally found resting under a tree. Reaching him, the king embraced him with great emotion.
— “Friend, I apologize for my harshness. I now understand the truth and the value of your proverb”.

He then told the minister about the incident of the sacrifice to the Goddess, and how he had been freed thanks to the defect the injury had caused.
— “Sire,” replied the minister, you did not cause any harm. There is nothing to forgive. Actually, you saved me. You may remember that when you kicked and chased me, I repeated the same thing: “God does everything for the better”. In my case too, the saying was true, because had you not dismissed me, I would have been with you, when those people of Kālī captured you. And when you were discovered to be unfit for sacrifice they would have killed me instead of you, since I had no physical imperfections like you so providentially acquired. God does everything for the greater good.”

This site uses Akismet to reduce spam. Learn how your comment data is processed.